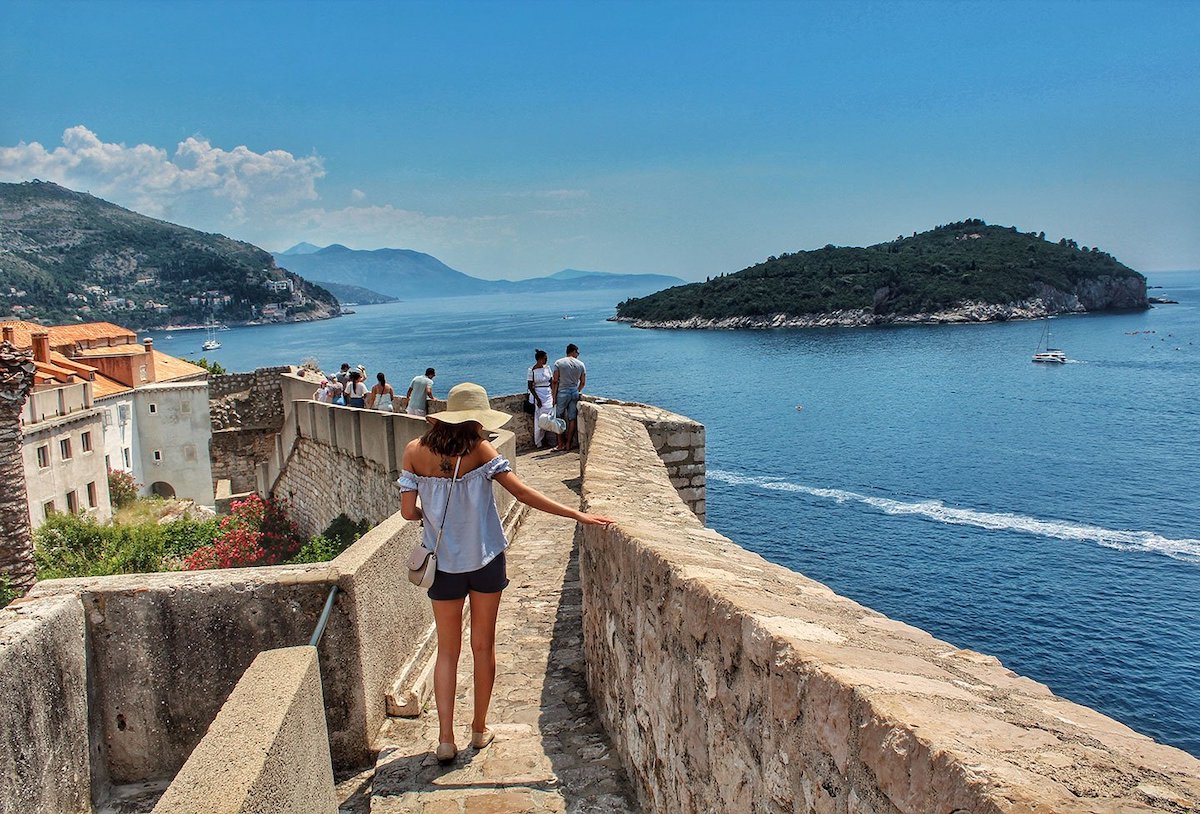 The beautiful Walls of Dubrovnik are certainly the highlight of any trip to the ‘Pearl of the Adriatic.’ Not only you’ll be taking a tour around the city from the top, but you’ll also learn so much about the Walls, historical facts about the Old Town, see many landmarks, and so much more!

The vibrant city will definitely take you back in time, as you take in the lovely views of Fort Lovrijenac and the surrounding area, Fort Bokar, with their medieval architecture, and the Adriatic Sea, from above.

Walking along the City Walls is the perfect way to combine Croatian history and an incredible sightseeing experience!

So, if you’re ever jet-setting to Dubrovnik, make sure to take a walk along the City Walls! Make it the most important activity to do on your list!

Do you want your tour around the walls taken care of from start to finish?

Well, all you have to do is join one of our Dubrovnik walking tours!

1. History of the Walls of Dubrovnik 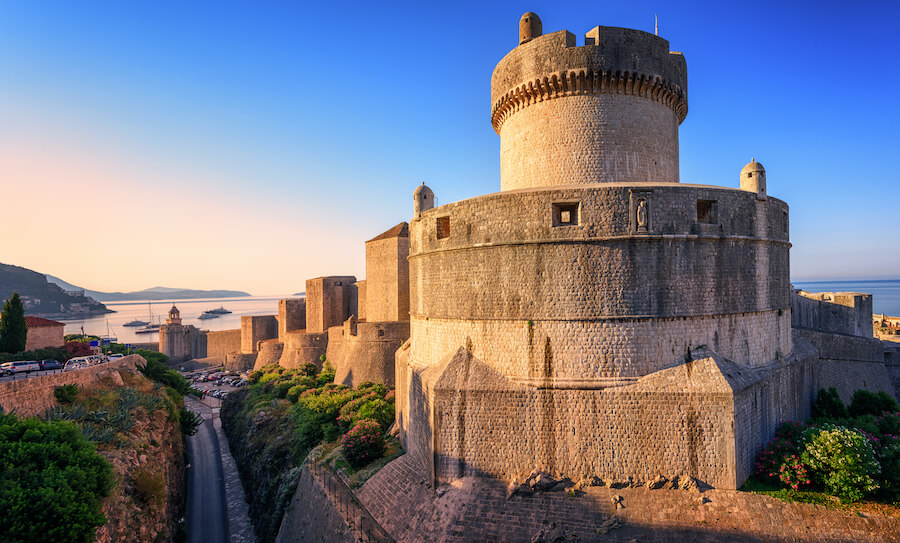 The Walls of Dubrovnik have a rich history. Records state that the initial walls were built around the 9th century. Of course, during medieval times, there were not much construction works happening in the city, meaning the walls then aren’t the same walls you see now.

Most construction works happened between the 12th and the 17th centuries, by the end of middle times and on the Renaissance era, which is the same period where Croatia thrived and became an important rival to the Venetian Empire.

The walls went through many changes, especially following the wars, the 1667 earthquake, and other remarkable events. Walls defenses were strengthened over time, and many additions were made.

The Walls of Dubrovnik are a significant landmark and efficient defense mechanism against the foreign attacks for the city.

Imagine enemies coming with ships and cargo to occupy the city, just to find themselves facing a gigantic structure of defensive walls at Dubrovnik’s seafront with a failed attempt to penetrate the Old Town.

Even better, Dubrovnik’s most notorious guards are privileged to watch new incomers from afar and get prepared for any potential battle, just by standing on the walls.

These thoughts will certainly cross your mind as you take a stroll along city Walls. They are massive! You probably can’t imagine how big they are, but the scale is overwhelming!

For more historical facts, you can visit the museums dotted in Dubrovnik and discover many interesting facts!

2. Points of Interest on the Walls of Dubrovnik 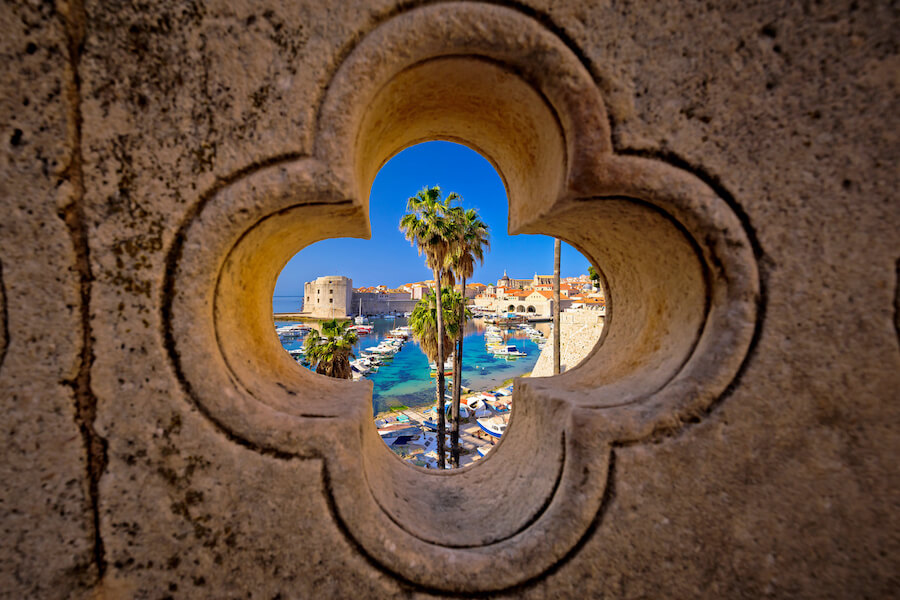 Walls of Dubrovnik welcome visitors all year around. You can come daily at any time to go up the Walls and take a walking tour along the city.

However, the Walls are closed on Christmas day ( 25th of December).

Opening hours change over the months, so make sure to follow this schedule when you jet set to Dubrovnik. 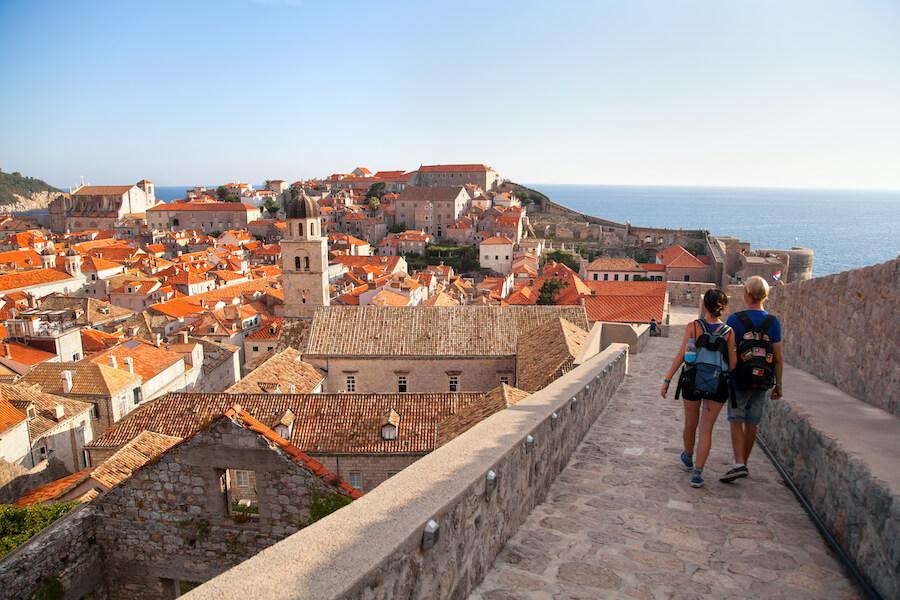 Walking along the walls of Dubrovnik is perhaps the most important activity to do when you visit the city. Visitors come from all over the world just to go up the Walls, take a stroll and witness the fantastic views from above.

Did you know that it takes about two full hours to go round the ancient city? The Walls are really long, with a total length of two kilometers surrounding the Old Town.

You can either choose to take a walk along the Walls on your own -and it wouldn’t be hard to find your way- or, you can join a guided tour and get important information about the Old Town, its history, its main features, etc.

Of course, guided tours can be private if you want to avoid crowded groups. Either way, it’s a unique experience to see the many landmarks from the top:

For your information, if you choose to join a guided tour, our tour options are available all year round, just ask any tourist office or check online!

Nevertheless, we gathered some information about Dubrovnik’s Walls that might be very helpful. You find them below: 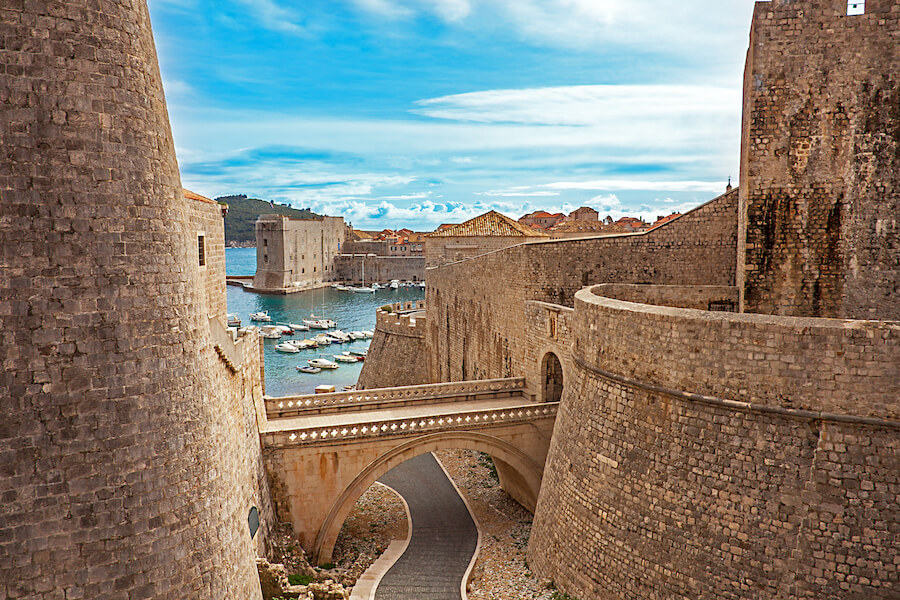 One thing you have to know before walking along the walls is their significant scale! Dubrovnik city wall complex are two kilometers long, and you will be surprised at the massive amount of work to build such magnificent fortifications as you walk along the uninterrupted City Walls.

Precisely, they are 1940 meters long, with different thickness proportions going from 5 to 16 feet in thickness.

As you can tell from the proportions, the Walls were the first defense mechanism of Dubrovnik, protecting it for centuries from any potential enemy. They were designed to surround Dubrovnik Old Town and to fail any penetration attempt from the mainland and the Adriatic Sea.

Many fortresses connect the Walls at every edge, and there are 17 fortresses in total, including three cylindrical ones!

Outside the Western Wall, you see Fort Lovrijenac, a main landmark of Dubrovnik, serving as both a defensive fortress and a theater.

6. When to Walk Around the Walls of Dubrovnik

Take your walk as the walls open; you will witness the colorful buildings as the sun rays light them up, or at the end of the day if you want to see a lovely sunset.

Avoid going to the Walls in the middle of the day because Dubrovnik tends to get very hot, especially in summer, and because it gets very crowded by visitors coming from cruise ships or guided tours.

7. Things You Need to Know Beforehand

Don’t worry about feeling dehydrated; there are a few cafes along the walk. The cafes are on the walls, serving cool beverages, ice cream, snacks, and providing incredible views of the Old Town, the mesmerizing Adriatic Sea, and many landmarks. They are perfect for a small pause when you feel tired and want to sit at a shaded spot. The cafes can be a bit expensive than regular cafes in the city, because of their location on the walls.

You reach the first cafe you can find if you start walking from the Pile Gate in about 15 minutes. It’s a bit small, so we recommend you to be patient, keep walking until you come across the other cafes, which are bigger and provide proper seats and tables.

Don’t worry! The Walls are dotted with toilets. So, don’t avoid drinking water, be safe, and stay hydrated! The weather is hot, especially in summer!

Be Prepared For a 2-Kilometer Walk 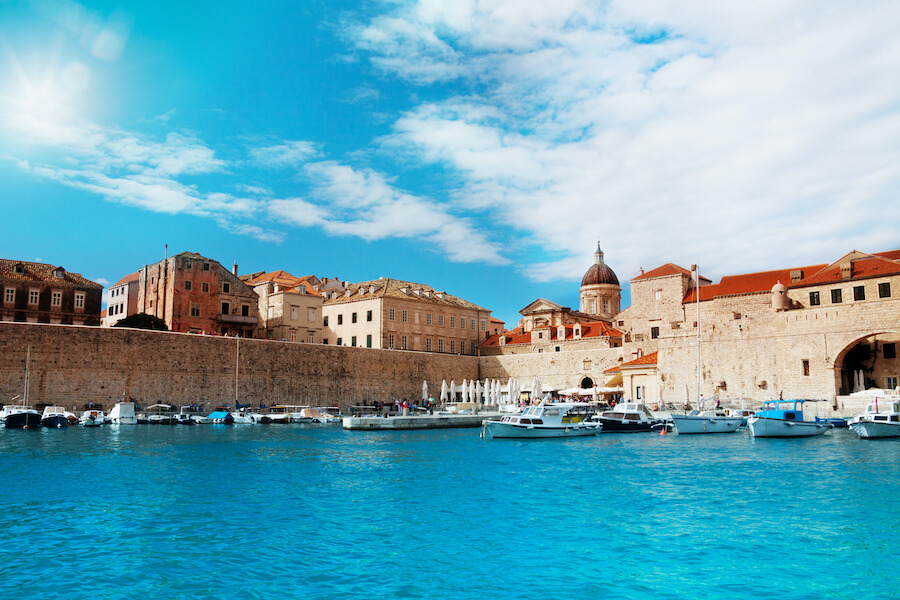 This means you have to wear suitable footwear for your tour. Just wear any comfy shoes you find best, preferably suitable for slippery paths. The walk is about two kilometers, with many steps going up or down as you go around the city.

Bring a Hat and Sunscreen

The weather is really hot, and the sun can be pretty deadly, especially in the middle of the day, as the temperatures go up. Protect your skin; otherwise, you can easily get a sunburn.

Bringing your own bottle can be really nice to save a bit of money. The water is obviously available at any cafe. Nevertheless, bringing your own water would be even better!

The best way to plan your walk would be the first thing in the morning, around 8 am, as the Walls open. Or, at sunset around 5-7 pm, to see the golden view of the city and the Adriatic Sea, as you reward yourself with a wine glass. And, we recommend Buza Bar for that!

Avoid midday because it can get really hot and crowded.

8. How to Reach the Walls of Dubrovnik 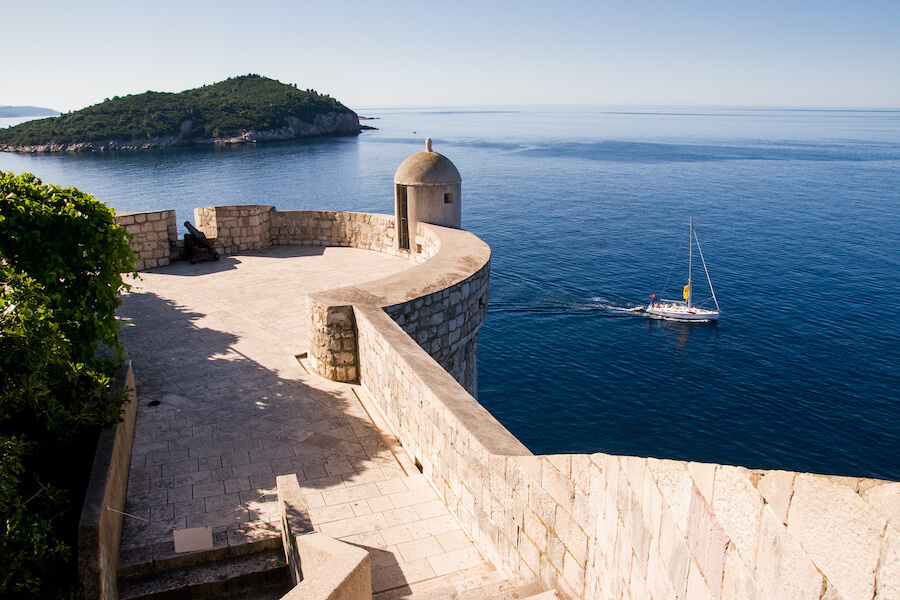 There are three entrances to the ancient walls of Dubrovnik:

How to Reach the Walls from the Old City Harbour

Some ships anchor in front of the ancient city. Boats are used to take visitors from the cruise ships to the Old Harbour.

If you’re a cruise visitor, it’s easy to find the closest entrance to the Walls from the Old Habour.

As you leave the harbour, turn to the right and walk a couple of minutes along St. Dominic Street until you get to the fortress of St. Lucas. There, you find an entrance to City Walls.

How to Reach the Walls from the Dubrovnik Cruise Port

For visitors coming from Gruz, get to the bus station. Buses no. 1A, no. 1B and no. 3 will take you to the Old Town. Ride until the last stop and then head to the Pile Gate, where you find the ticket office. All you need to do is buy your City Walls tickets!

How to Reach the Walls from Lapad/Babin Kuk

For visitors from Babin Kuk or Lapad, you need to take buses no. 4 or no. 6, which will take you to the Old Town.

You need to reach the Pile Gate and get your entry tickets from the ticket office. That’s it!

There are a few cafes and bars on the City Walls! Some of them are even cliff-bars like Buza Bar.

The cafes offer seats and tables overlooking a lovely view of the Adriatic Sea. You can relax and enjoy the summer breeze, a cool drink, or a light meal.

At the end of the walk, after two kilometers, the mind-blowing panoramic view of the city and the blue Adriatic will make you forget all the effort you made. And what’s even better? There’s a cafe at the very end where you can enjoy the sunset view!

10. Sunset Over the Dubrovnik Walls 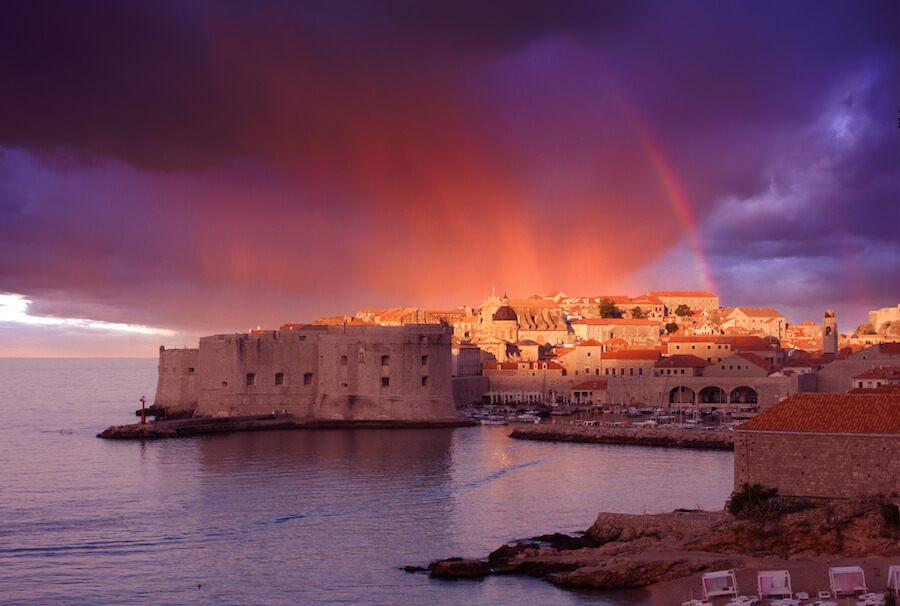 The best spot to watch the sun go down is by the end of the walk. You’ll see a panoramic view of Dubrovnik, the Adriatic Sea, and Fort Lovrijenac. You’ll find perfect spots to sit by the Minceta Tower and watch the sunset. There are bars and cafes where you can have a drink and take in the golden views!

Verdict: Are Dubrovnik Walls Worth It?

The walls of Dubrovnik are the city’s main attraction, so they’re definitely worth a visit. That said, you would be missing out on a lot of useful tips and information if you go alone and unprepared, which is why you ought to join one of our Dubrovnik walking tours!

Do you want to get the most out of your trip to the walls of Dubrovnik?

Make sure to take a look at our Dubrovnik walking tours!