If you’re staying in Dubrovnik, it’s impossible to miss out on the opportunity of passing through the Pile Gate, and indulging in the depth of the Old Town and its cultural heritage.

The start of almost any tour

Almost any tour of the old city starts at the famous Pile Gate, which is one of the top attractions among visitors! It is also a good spot to start the city wall walk.

The gate is the main entrance to the walled city. It is located on the western part of town walls. Not only can it give you access to the city walls, but it will take you straight to the main, most famous street: The Stradun – town’s main promenade. 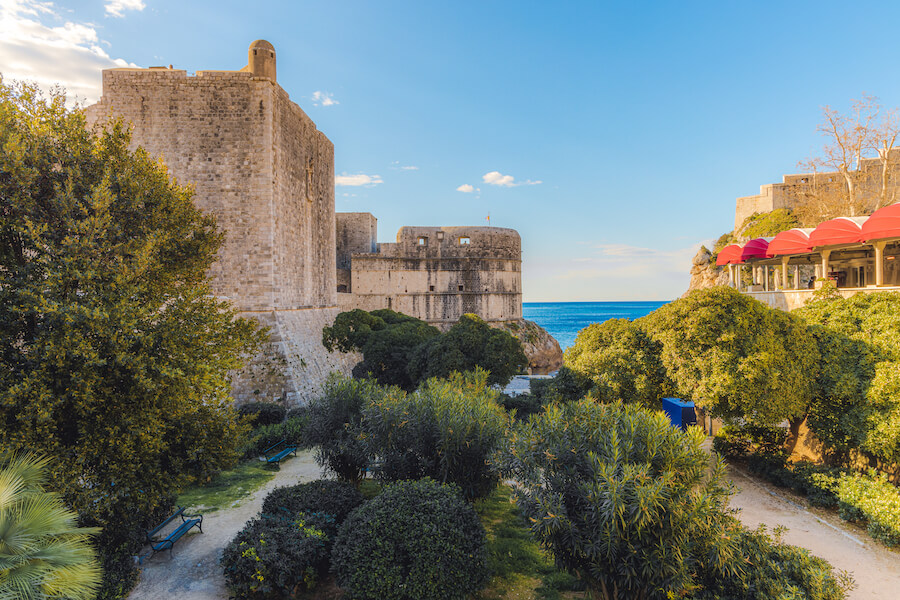 Once a significant defensive structure, now is the starting point of a fantastic Dubrovnik city tour and its medieval walls!

Let’s not forget to mention that Pile Gates was one of the filming locations for the ultra-popular Game of Thrones TV series.

Do you want your trip to Pile Gate Dubrovnik taken care of from start to finish?

All you have to do is join one of our tours! 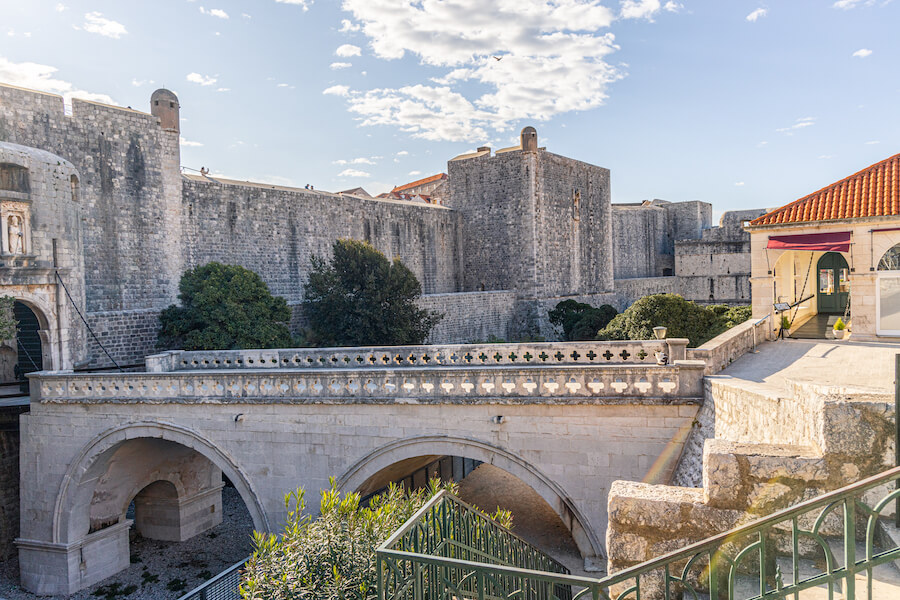 Pile gate of Dubrovnik has medieval architecture. It consists of two gates:

Initially, the two gates were connected by a wooden drawbridge, a typical bridge design during medieval times.

As time goes, the drawbridge was replaced by a stone bridge connecting the two arches.

Later on, in 1806, the French army entered through these gates, led by Napoleon, to take over the city and put an end to the Dubrovnik Republic.

If you’re going to Old Town through Pile gate, make sure to look down at the open space the moment you cross the bridge. That area was once a deep-water ditch surrounding the gated city.

Right at the entrance, look above, and you will notice the statue of St. Blaise, the patron saint of the city, which was sculpted on both the inner and the outer arches.

The statue of the patron saint, St. Blaise located on the Renaissance arch is as old as Pile gate.

However, the statue of the inner gate was created in the 20th century by the most prominent Croatian sculptor Ivan Mestrovic. 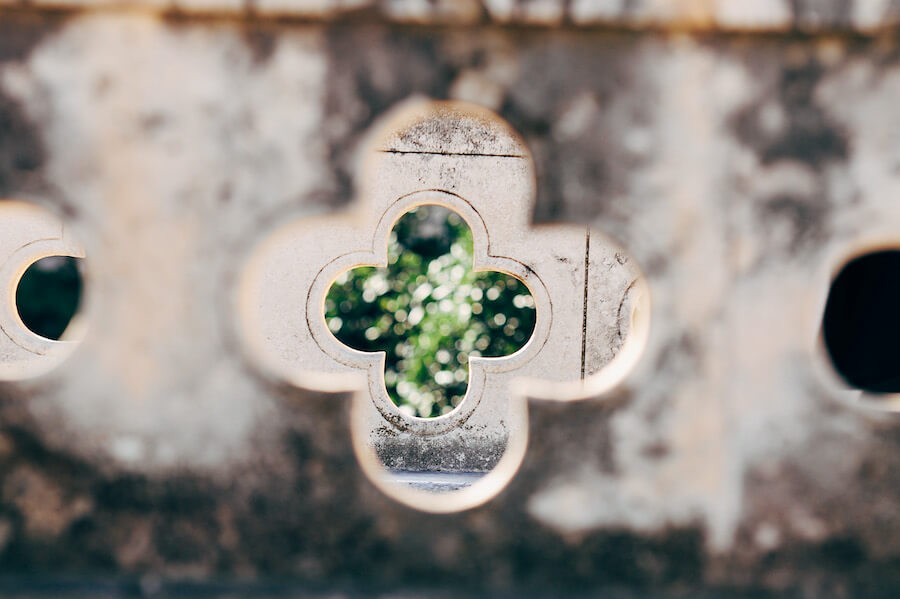 After you go through the outer gate, it’s possible to see the mechanical counter weights used to pull the drawbridge. They played a major role in protecting the city from any intruders at night.

And, as you pass through both gates, you will find yourself at the Stradun, the lifeline of Old Town. It is the busiest street of the ancient city, with thousands of visitors crossing the cobbled path daily to see the 17th-century buildings.

NOTE: There is disabled access to Stradun – just turn left and access the promenade along the ramp. 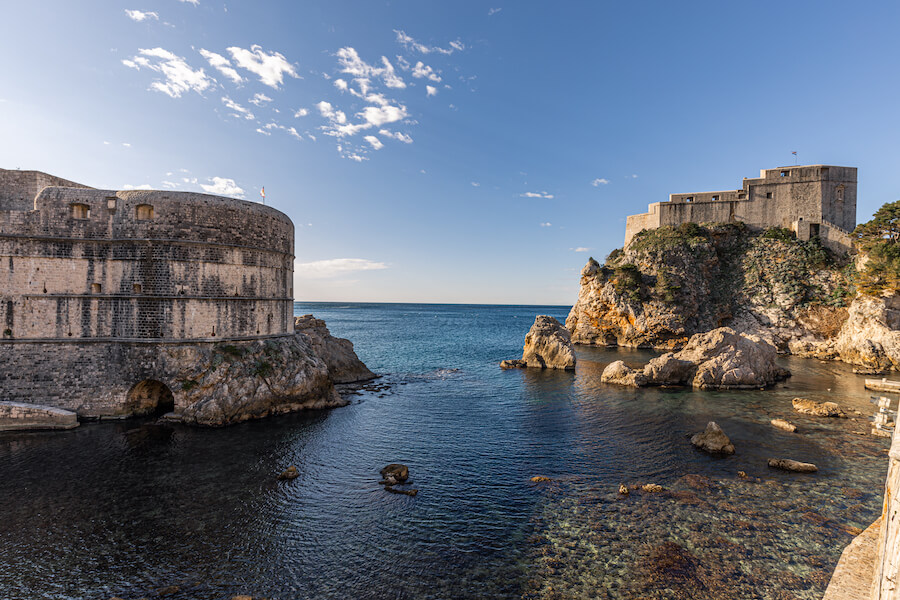 The gate is a meeting point for both tourists and locals and it is one of three access points to the city. You can enjoy the view over a nearby small fishing harbour, fort Lovrijenac – another Game of Thrones filming location, crystal clear Adriatic sea

How to Go from the Airport to Pile Gate

If you’re going to visit Old Town, we recommend you take a bus instead of a taxi. Dubrovnik City buses are much cheaper! Moreover, they are very convenient because they will take you very close to Old Town where the traffic isn’t allowed. A taxi can’t take you to the pedestrian-only area whereas a bus can!

Any bus coming from the airport will drop you at the western side of Dubrovnik Old Town, meaning at the Pile Gate, which is the main entrance. However, if you want to be taken to the eastern entrance, through the Ploče gate, it would be better to take a taxi because the bus wouldn’t drop you there.

So, if you’re at the airport and want to reach Dubrovnik’s Old Town, you will find the airport buses waiting to take passengers. The bus times usually match the arrival time of passengers. However, you might need to wait a bit longer for a bus to take you, because they are probably bringing people to the airport too.

Usually, they take 15 minutes at max, so no worries! Nevertheless, if you are in a super rush and want to reach your destination as soon as possible, taking a taxi would be better. 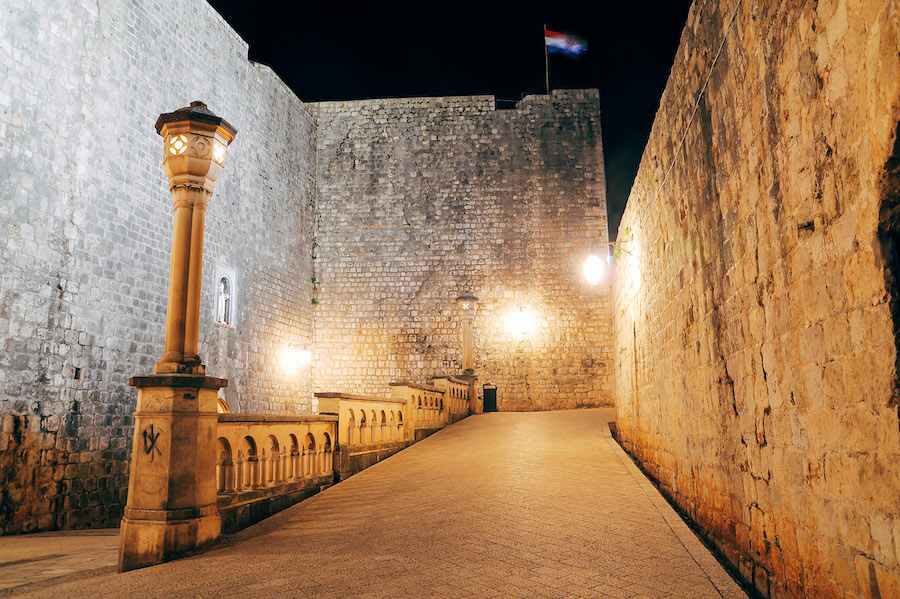 Here are the prices for the bus tickets:

There are no extra charges to pay if you are carrying luggage.

The bus tickets can be bought in two ways:

You buy the ticket directly when you take the bus: Once you take a seat, the driver or his assistant will sell you a ticket before departing.
You get your ticket online from the bus company’s website: www.platanus.hr/shuttle-bus.html
The bus ride takes approximately 30 minutes to take you to Old Town from the airport. It will reach its destination at the Pile gate and drop you off there.

The area can be a bit crowded, considering the number of people getting through the gate, and the number of taxis and buses stopping there. So, make sure to take your luggage fast and make a quick exit to avoid the crowds!

Do you want your tour of Pile Gate taken care of from start to finish?

All you have to do is join one of our tours!