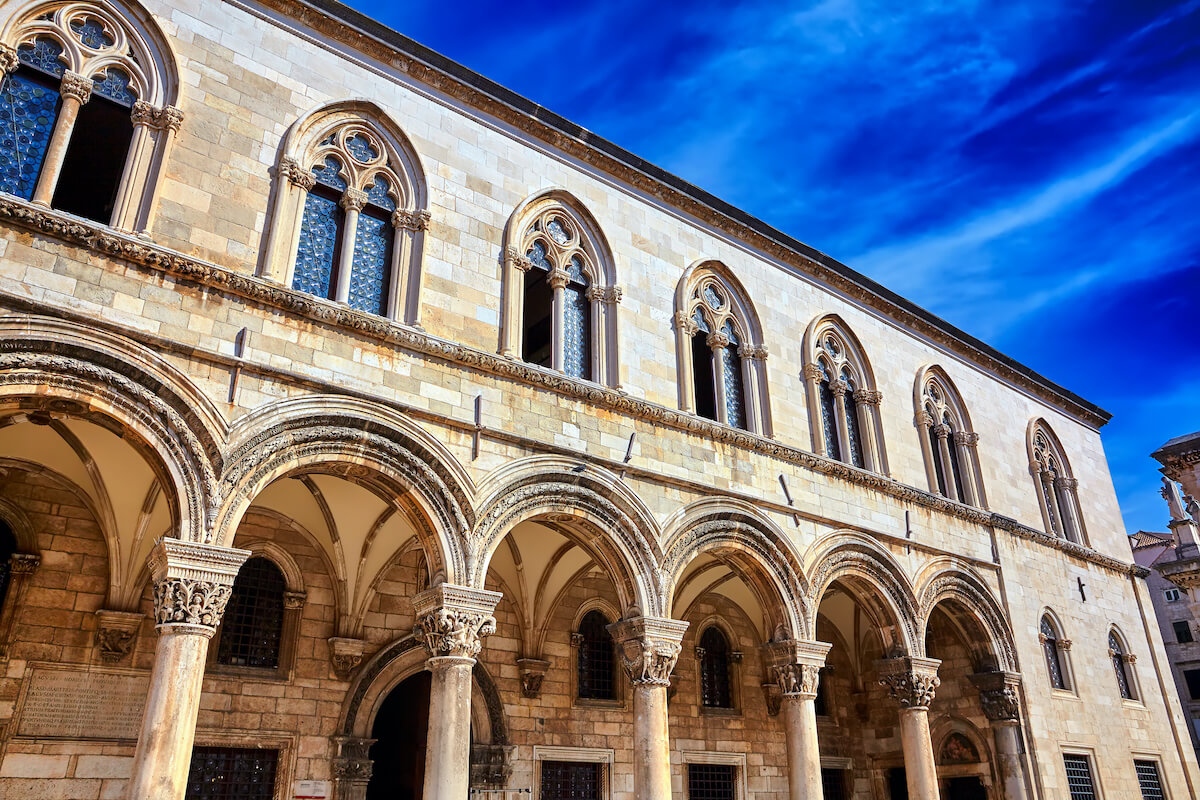 Staying in Dubrovnik offers you the immense opportunity of visiting many landmarks and museums! The ancient city is dotted with very interesting places, where you can enjoy the architecture and learn about historical events and interesting facts!
The seat of the Rector of the Republic

Gothic style building, Rectors palace, or Knežev Dvor in Croatian, is one of the most popular attractions among visitors. And you can learn so much about Dubrovnik’s history there because it used to be an important administrative building from the times of Ragusa Republic.

Rectors Palace used to be the seat of the Rector of the Republic who governed Dubrovnik, where he only could stay there during his mandate. It was Rector’s office. Along with that, the 13th-century building houses many state offices, a dungeon, private chambers, etc.

The basic gothic Palace was reconstructed on many occasions following major events, turning the building into a Gothic-Renaissance palace. 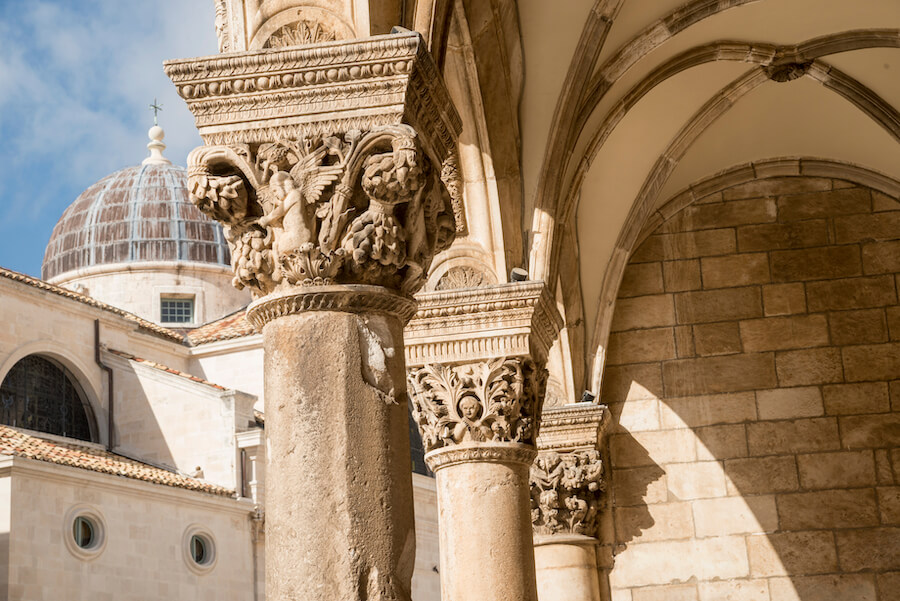 Nowadays, the Palace houses a museum where you can learn so much about it, see interesting artifacts, and it’s also a music venue, where you can attend classical music concerts!

Want to take a closer look at the Rector’s Palace in Dubrovnik?

Join one of our tours around Dubrovnik!

The Palace and the museum have the same opening hours: They operate daily from 9 am to 6 pm. In winter, both places close at 4 pm.

To enter Rector’s Palace, you need to get a ticket. The ticket costs approximately 120 Kuna per adult and 25 Kuna per child. The ticket includes free access to Revelin Fort, the house of Martin Držić, and four museums!

If you want to visit Rector’s Palace only, the ticket costs about 80 Kuna. However, we recommend you choose the first option. That way, you can visit six other different attractions!

If you own a Dubrovnik City Card, you don’t have to pay anything! The Ticket price is included in the card.

Rector’s Palace’s main portal is located on the western wall. It’s the main entrance of the Palace. The entrance is decorated with arcades and arches.

You will be astonished by the meticulous work done to create such detailed carvings.

The western façade is a top attraction among visitors because it features a lovely covered corridor, bounded by arches, where you can sit down and relax in its shade.

Above the entrance door, the inscription can still be seen stating:

“Forgetting your private business, concern yourselves with public affairs” 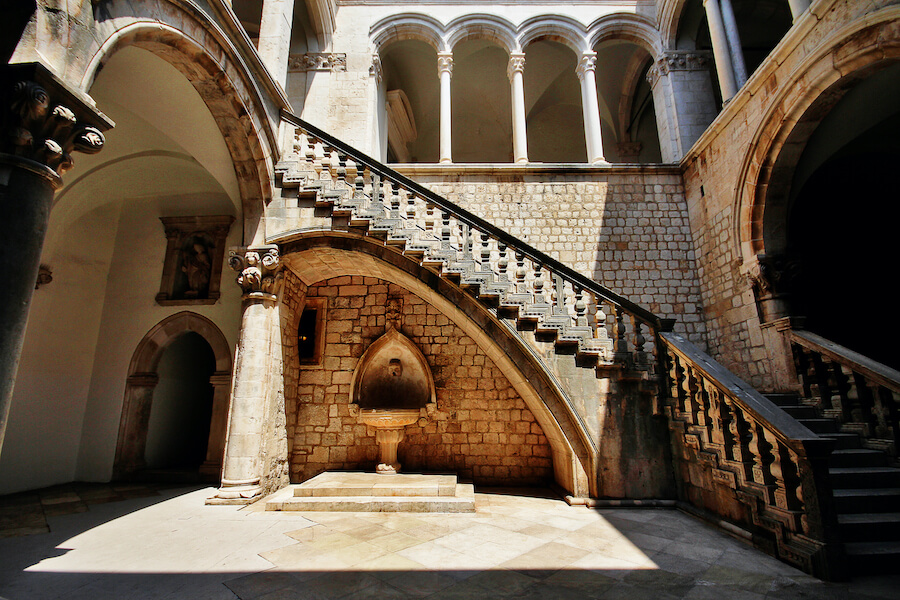 The inner courtyard of Rectors Palace and its atrium is dotted with Corinthian-style columns. You will notice them straight away with their sleek and slender shape and their well-decorated upper bases.

Following the 1667 earthquake, new Baroque-style stairs were added in the interior atrium. You can go up the stairs, which will take you to the gallery.

The interior atrium also features a monument created to honor Miho Pracat – who was the only commoner to get that honour in Dubrovnik’s history. He was a rich man who chose to leave his entire wealth to Dubrovnik. The monument was sculpted by Italian sculptor Piero Paolo Giacometti in 1638. The atrium also features a fountain dating from the 15th century.

Nowadays, Rector’s Palace serves as a classical music venue, where many music concerts are held in the interior atrium. If you enjoy classical music, you might be lucky and attend a concert at the Dubrovnik Summer Festival!

Rector’s Palace also features a museum. So, if you’re done exploring the insides of Rector’s Palace and its fine architecture, make sure to visit the museum to discover other interesting things about the Republic of Ragusa that once ruled this part of Croatia!

4. History of the Rector’s Palace: 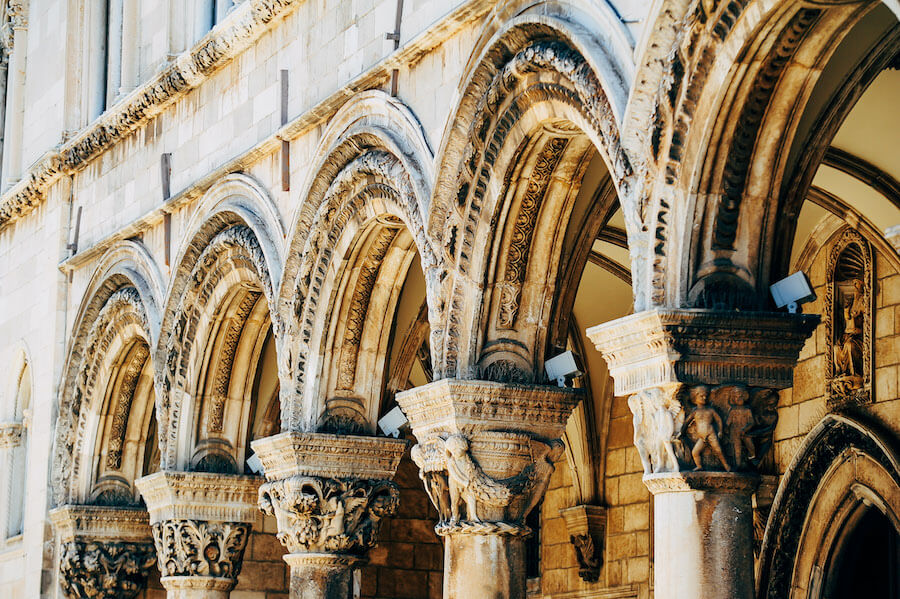 Let’s go back to the 15th century; Rectors Palace was established to serve as the seat for the elected Rector or Knez. The chosen Rector had to stay there during his mandate. He wasn’t allowed to leave the Palace. He had to stay for a whole month, away from his family, and never left, only on official occasions.

One of the major duties any Rector had to do is to look after the Town’s Keys at night. After the closing of the city gates, the keys were given to the elected Rector, where he had to keep them safe until the following day and give them back to the city guards.

Rector’s Palace didn’t serve as an accommodation to the Rector only. It also served as the headquarter of Consilium minus (also known as the Minor Council of the Republic of Ragusa), the state administration, armory the watch house, and the city dungeon, powder magazine.

In the early middle ages, it served as a defence building of Dubrovnik Republic.

After the first explosion, Dubrovnik Republic needed a new palace, so, it was rebuilt by master builder, Onofrio Della Cava of Naples, creator of The Big Onofrio’s Fountain and city aqueduct, and the architect Salvio de Michele of Florence.

Finely carved capitals in renaissance style were works of Pietro di Martino of Milan. The Renaissance capitals were added to the main Gothic portal. Today, an ornate staircase, along with exterior columns in the ground floor atrium is used for concerts.

Unfortunately, like any building in the city, Rector’s Palace was severely damaged by the 1667 earthquake. Following the earthquake, it was rebuilt and constantly repaired in Baroque style, complementing its existing Gothic style.

The Palace was then sacked by the Napoleonic army, following the fall of the Dubrovnik Republic, and a good number of valuable artifacts were taken away.

Nowadays, the beautiful Palace stands as mesmerizing as ever, regardless of the earthquakes, explosions, attacks, and fires.

An initial gothic design from the medieval times with Baroque and Renaissance added elements, creating a glorious landmark standing in the city of Dubrovnik and welcoming visitors. 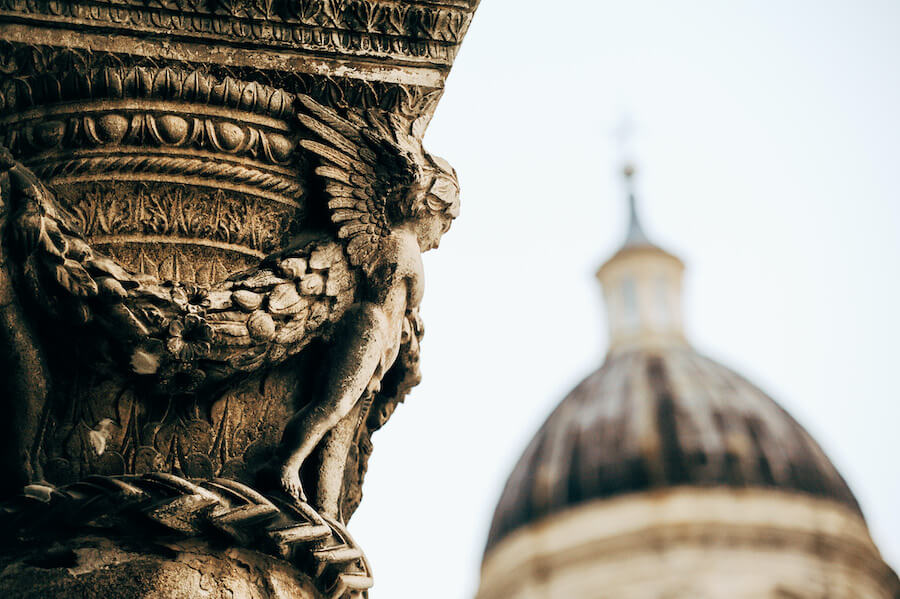 Today, Rector’s Palace is welcome to visitors coming from all over the world. You can explore its fine architectural details from its exterior renaissance style facades, or you can take a closer look at the inside. It is also home to the history department of the museum of Dubrovnik.

Despite being rebuilt many times, the building retains a striking compositional unity.

The Palace features a museum, showcasing beautiful old artifacts of the noble families. It displays old archives from the Minor Council meetings, the original Code of Conduct, and other old documents.

In the exhibition halls, you can see the carved bookcases, remaining furniture dating from the 18th century, the old currencies of the Ragusa Republic, portraits of nobility, wigs, etc.

You can also have a look at the selection of seals and crests dating back from medieval times.

If you want to find out more about the building, visit Rectors Palace! With its iconic structure and attractive features, you will appreciate every part of it! It is among the most popular Dubrovnik museums.

Want to experience Rector’s Palace? Join one of our tours around Dubrovnik!