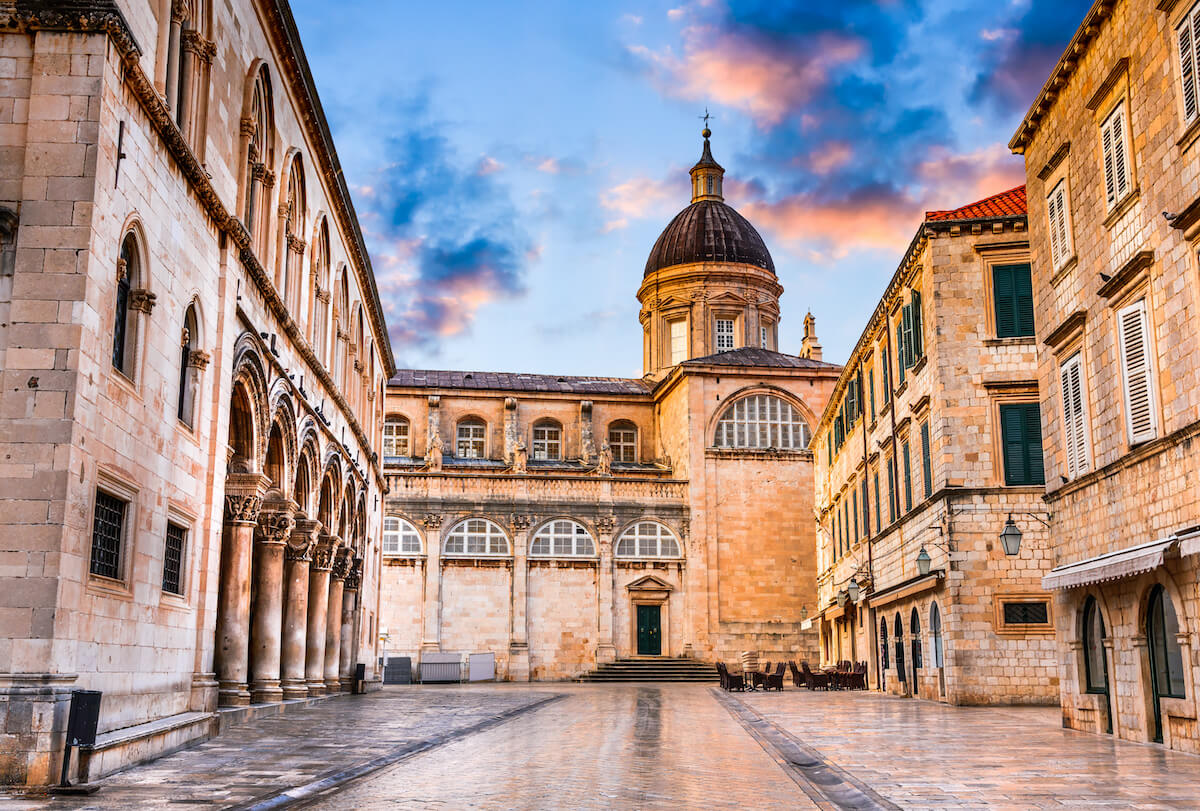 The Cathedral of the Assumption of the Virgin Mary or, simply, Dubrovnik Cathedral is a top attraction in Dubrovnik city Old Town.

A cathedral on top of several former cathedrals

Records state the Dubrovnik Cathedral of the Assumption of the Virgin Mary dates back to the 7th century. Archeological diggings showed that Dubrovnik Cathedral is built on top of several former cathedrals, which foundations and walls were found under the base of the current Cathedral.

The first remains of cathedrals dating back to the 7th or the 8th century. However, this older church had major changes around the 10th century. Some of the modifications consisted of building a dome on top and painting frescoes on its walls. 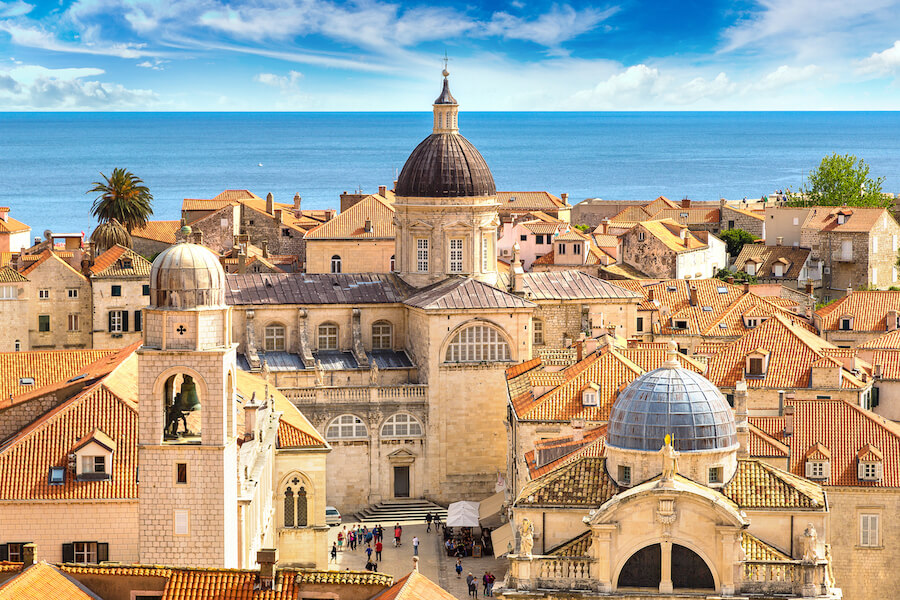 It is said that Dubrovnik’s new church was rebuilt by the English King, Richard the Lion-Heart. Around the 12th century, just after the third crusade, King Richard suffered a shipwreck and was cast on Lokrum island. And in recognition of the people’s hospitality, he funded a Romanesque style Dubrovnik Cathedral in 1192 on the same site as the old church.

Unfortunately, the mesmerizing Baroque style, the luxurious domed basilica was largely destroyed following the great earthquake of 1667. However, reconstruction works started just after the earthquake, and the new Cathedral was completely rebuilt in 1713.

The Architecture of Dubrovnik Cathedral 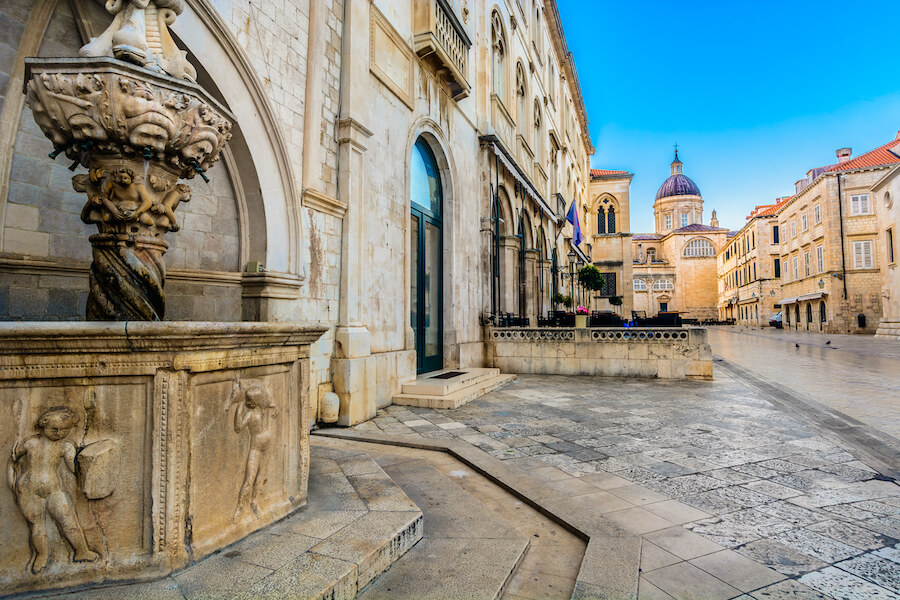 The design of Dubrovnik Cathedral is very catching. It has plain side walls richly decorated with pillars, windows, and many statues.

When you arrive there, the first thing you’re going to notice is the four Corinthian columns in the front, flanking the entrance of the Cathedral. These columns are very sleek and slender, and they are richly decorated in their upperparts.

After you go up the few steps leading to the entrance, take a glimpse at the door. A large Baroque window is built just above it.

In the upper part of the Cathedral, you will notice a triangular gable roof, and four statues representing saints standing on a railing, which is supported by many balusters.

The façade features two deep niches on each side, containing a statue of Joseph with a Child and a statue of the patron saint of Dubrovnik, Saint Blaise (or St. Vlaho).

The Cathedral is built in the shape of a three-nave building with a grand baroque dome on top.

When you go inside, you will notice a Basilica-type building. The central, high nave, features two aisles and massive columns. At the intersection of the central nave and the transepts, there’s a large dome with a Baroque design.

The Cathedral of Dubrovnik has, also, three apses and numerous altars.

If you take a closer look at the main altar, there’s a beautiful polyptych decorating it. If you don’t know what a polyptych is, it’s a type of painting divided into panels. Folds or joints usually attach to these panels.

Italian Renaissance artist Titian originally painted this piece of the main altar in 1552. Initially, the painting was located in the St. Lazarus church. And, following the 1667 earthquake in Dubrovnik, the painting was moved to Dubrovnik’s Cathedral. It portrays the Assumption of Mary.

Side altars hold paintings by Italian and Dalmatian masters of later centuries, as well.

The Altar of Petilovrijenci, for example, was built in memorial of three saints. The bones of three Montenegro martyr saints were imported to Dubrovnik. At first, the saints’ remains weren’t in Dubrovnik Cathedral; they were in the Church of Petilovrijenci. But, following the 1667 earthquake, the church was badly damaged.

So, the remains were brought to Dubrovnik Cathedral. It was, in some way, an encouraging motive to many pilgrims so they can come to, then, Dubrovnik Republic.

There’s an interesting story behind the altar of Our Lady of the Port. This votive altar contains a small collection of coral jewellery. Back in the time, sailors used to pray at this altar to be safe when they are working in the middle of the sea. And they used to leave coral ornaments there.

Another important altar to mention is St. John’s altar. This jaw-dropping Baroque altar is made of beautiful purple marble. 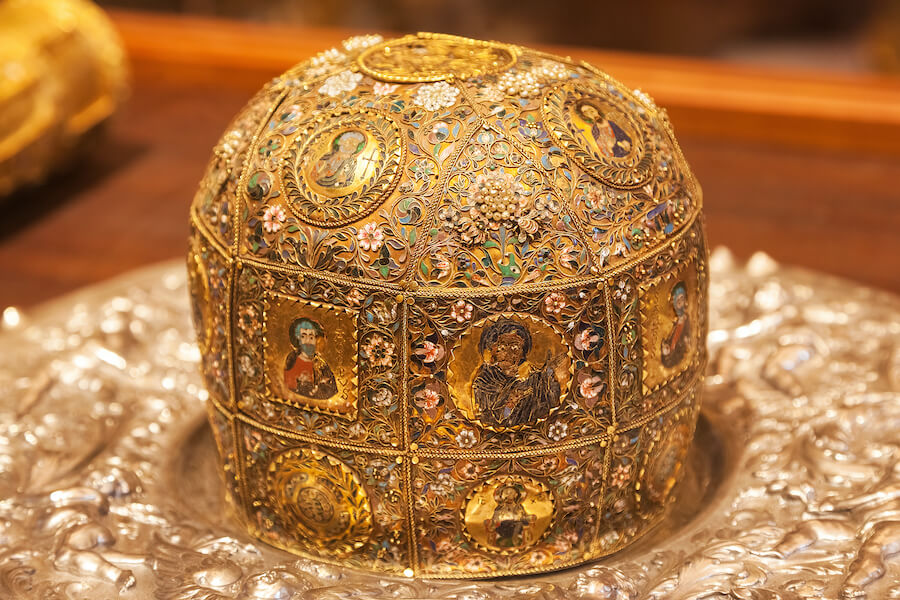 Dubrovnik’s Cathedral holds 182 reliquaries! It’s one of the richest Cathedrals on the Adriatic coast. These reliquaries are containers to various precious relics dating from the 11th to the 18th century.

The relics found in the Cathedral of Dubrovnik consist of sacral dishes, beautiful paintings, and remains like the leg, the arm, and the head of St. Blaise. Some even say it contains pieces of clothes of Jesus Christ himself.

Of course, the most important relics are the head, the leg, and the arm of St. Blaise, the patron saint of the city. Spooky, right?

The reliquary containing the head of St. Blaise is well ornate. It dates back to the 11th or 12th century, and it shows the meticulous work done by Dubrovnik’s best jewelers. The reliquary is shaped like an imperial crown of the Byzantine type and is decorated with precious stones and enameled medals.

Apart from the numerous and vibrant reliquaries, the treasury of Dubrovnik’s Cathedral holds many precious paintings. Some artworks date back to the 13th century, like the Virgin with Child.

Famous masters like Padovanini, Parmigianino, and Palma il Giovane painted some of these pieces of art.

The Dubrovnik Cathedral of the Assumption of the Virgin Mary does sound magical, right? Well, you can experience that magic first hand by joining one of our tours around Dubrovnik!